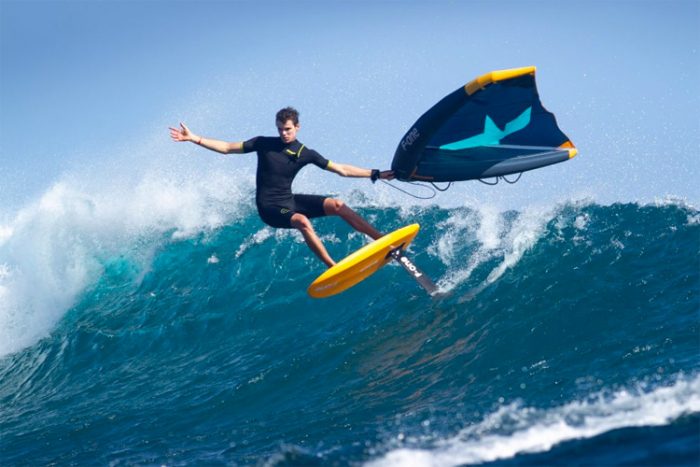 In the last two years there has been a lot of talk about this new water spot, the wing foil, which has attracted the attention of kitesurfers and windsurfers, but also of newcomers to sailing and surfing who see in this new sport a revolution.

The wingfoil exploits the force of the wind to glide on ‘water through the use of a sail or wing-shaped kite to generate traction and a hydrofoil board to navigate. 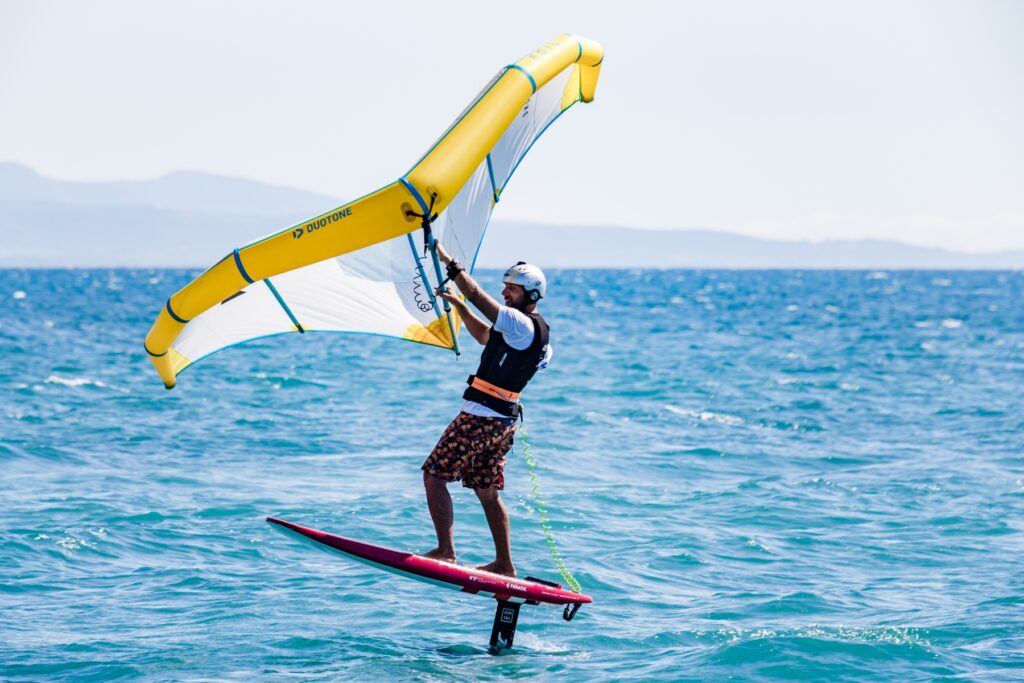 The Wing is formed by a structure of inflatable tubes in the shape of a kite that serves to give it a semi-rigid structure to the actual canvas with a leading edge and a trailing edge, similar to the kite, and a boom that can be inflatable, rigid or hybrid to maneuver it like a windsurfing sail decoupled from the board that you hold with the strength of your arms. Depending on the intensity of the wind there are different sizes from 2.5 to 7 meters.

The mono directional board has a shape that is very similar to the historical kite-race boards, short, wide and voluminous with a squared tail that must give the rider enough buoyancy to start but not too big to be manageable once in flight. The mast and the foil are the booster of the system and increase the performance thanks to the laws of hydrodynamics.

In addition to Wing Freeride, there are already several specialties such as Wing Freestyle and Wingsurf, which in some cases is practiced without the wing, but the propulsion is done by pumping on the board. 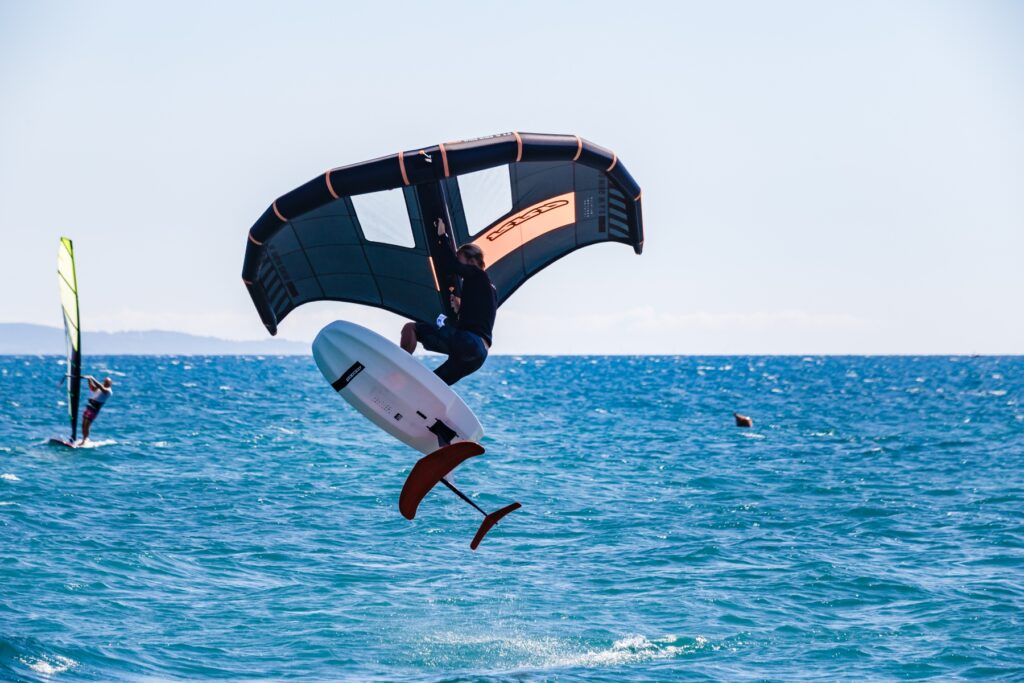 The real revolution of board water sports is therefore the hydrofoil system that with the combination of different sizes and profiles of boards and foils has given the world of water sports a new perspective both in terms of performance and in terms of learning and dissemination of kitesurfing, windsurfing and now WingFoil.

The performance of foils has multiplied the possibility of training, even with 8-10 knots you can glide at decent speeds, something unthinkable until a few years ago when many of us did not even mount the equipment if there were not at least 15-20 knots.

Another aspect that many people liked is the convenience; the wingfoil is small, quick to assemble and safe, especially with the crowded beaches and the limitations of the summer period. 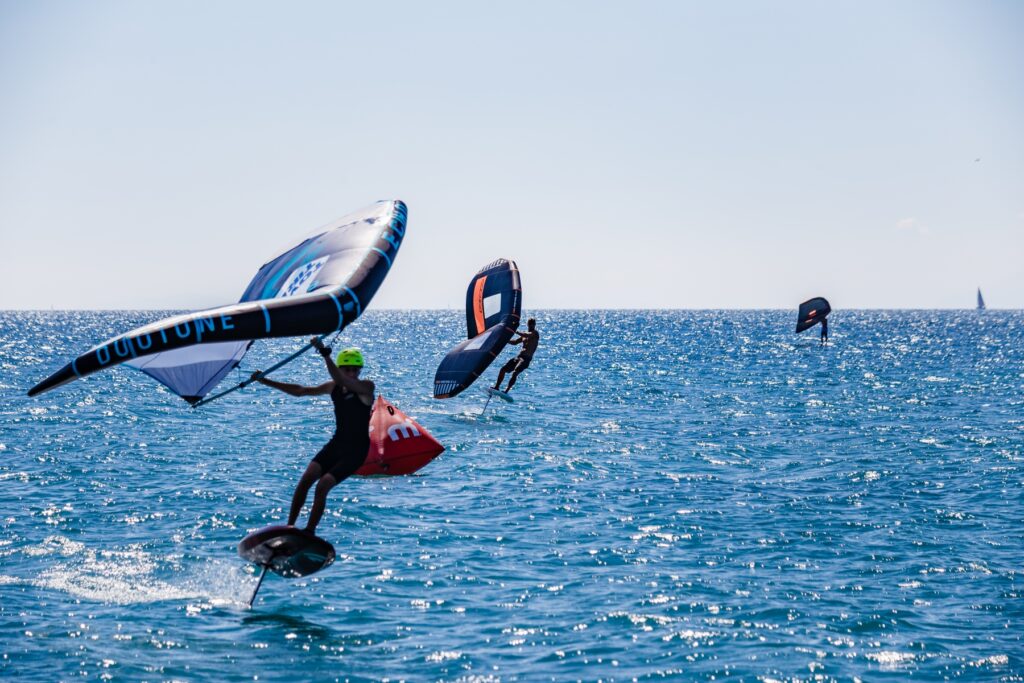 The Wing Sport has recently become part of the Classe Kiteboard Italia(CKI) della FIV that this Olympic quadrennium changes its acronym in CKWI and is already working on a program of races and regattas to promote the competitive aspect of WingFoil.

We at Locals Crew believe in the Wing Foil project and we are ready to promote this new discipline, courses and lessons are already available in Salento.

Wing Foil Course in Salento? You are in the right place
Extraordinary and elective assembly CKI
Login to Locals Crew ASD
Reset Password
Enter the username or e-mail you used in your profile. A password reset link will be sent to you by email.